Thank you for your patience while we retrieve your images.

Created 21-Aug-09
Modified 27-Aug-12
Visitors 169
6 photos
A gall is an abnormal growth produced by a plant or other host under the influence of another organism. It involves enlargement and/or proliferation of host cells, and provides both shelter and food or nutrients for the invading organism. (from British Plant Galls by Margaret Redfern and Peter Shirley).

Most galls are caused by fungi (particularly rusts and smuts) or invertebrates. Prominent among the latter are aphids, mites, psyllids, gall-midges (Cecidomyiidae), gall-flies (Tephritidae), gall-wasps (Cynipidae) and sawflies, but a wide range of other invertebrates are included. Galls can also be caused by viruses, bacteria and phytoplasmas. 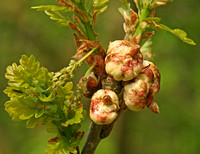